Blockchain Loyalty provides deep insight into how this new type of program design is being used to disrupt loyalty and reinvent marketing around the world using cryptocurrencies.

A blockchain loyalty program rewards members with a cryptocurrency (or cryptotoken) instead of traditional points and miles when they spend. The cryptocurrency is actively traded on a digital exchange and the value fluctuates based on speculative investor behaviour and the market forces of supply and demand. Members become fascinated with the idea of earning a currency which is ‘alive’.

Blockchain and cryptocurrencies deliver the biggest opportunity in the past 30 years for companies to gain a competitive edge with a new loyalty program approach. If successful, the result will be more loyal customers, increased sales, a more responsive marketing database, genuine market differentiation and significant profits.

This area is so new that at the time of writing there are no blockchain loyalty programs operating in the world at scale. The magnitude of the impact this new approach will have on the loyalty industry will only be evident after several years. Future editions of this book will detail the successes and failures of different approaches to better illustrate the optimal application of blockchain loyalty.

PHILIP SHELPER has over 12 years’ experience within the loyalty industry, including roles at Qantas Frequent Flyer and Vodafone, as well as running his own loyalty management consultancy, Loyalty & Reward Co. He also manages www.blockchainloyalty.io, a global blockchain loyalty resource centre.

Blockchain Loyalty is available at all good book stores 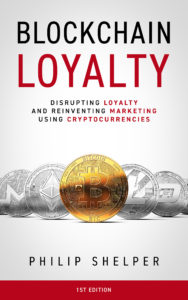